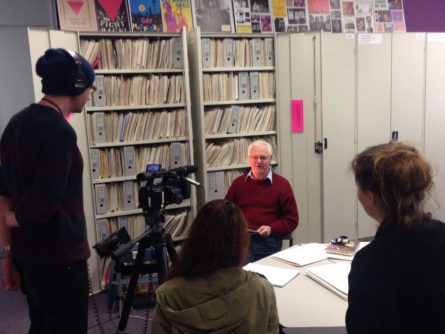 It is with great sadness that we acknowledge the death of Graham Carbery, teacher, activist, VFL senior umpire, and archivist and historian for the gay and lesbian community. While Graham was an important gay liberation and law reform activist from 1972 onward, most notably with groups such as the Gay Teachers and Students Group and the Homosexual Law Reform Coalition, his legacy is the extent and longevity of the Australian Lesbian and Gay Archives, which he founded and committed much of his life to for the past 40 years. Graham is survived by his partner of 45 years Gary Jaynes, and our thoughts and love are with him, his family and friends.

Angela Bailey, ALGA President, on behalf of the ALGA Committee, our members and supporters.

Image: Graham Carbery being interviewed at the Archives for the Victorian Equal Opportunity and Human Rights Commission’s ‘Pride Not Prejudice’ video series, September 2015