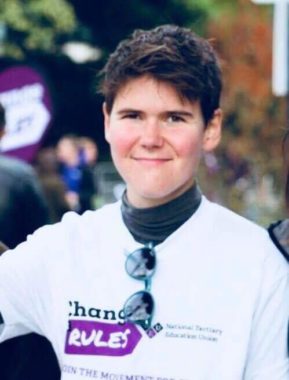 We would like to congratulate Geraldine Fela for winning the Australian Lesbian and Gay Archives (ALGA) Honours Thesis Prize for 2016/2017. Her accomplished study of nurses during the AIDS crises ‘Critical Care: Nurses, their unions and the AIDS crisis‘ demonstrated uncommon originality, insight, and depth of scholarship.

As one of our judges, Noah Riseman, states “this is the first scholarly study of Australian nursing during the AIDS epidemic. Drawing on oral history interviews, media reports and the records of nursing unions, the thesis shows the ways that the rise of nursing unionism intersected with concerns about care for AIDS patients. It was the activism of nurses, sometimes individuals, sometimes at the union level, who influenced the adoption of universal precautions and who pushed for care, rather than stigmatisation, of AIDS patients. The thesis draws on a significant body of secondary sources on nursing, labour. LGBTQI and HIV/AIDS history. In doing so, it shows the ways different fields of history can inform each other.”

The prize is $250 and 1 year membership of the Australian Lesbian & Gay Archives.

Geraldine has now commenced a PhD which builds on this research at the Monash University School of Philosophical, Historical and International Studies.

We received a large number of high quality submissions of theses submitted in 2016 and 2017 from a wide variety of disciplines – history, sociology, visual arts, law, literature, media and cultural studies and beyond – on a diverse range of topics, and would like to thank and congratulate everyone. We look forward to following your work.

We would also like to thank our external judges Dr Deborah Dempsey, Dr Noah Riseman, and Dr Ray Cook who helped us find a winner.”