On July 27 1969, a public meeting in Canberra founded the Homosexual Law Reform Society, the first organisation in Australia to stand up for homosexual rights. Undoubtedly, the founding moment of a movement that was to transform Australia beyond anything anyone could have imagined at the time. On the 50th anniversary we remembered this event with a panel discussion with four of the original members. 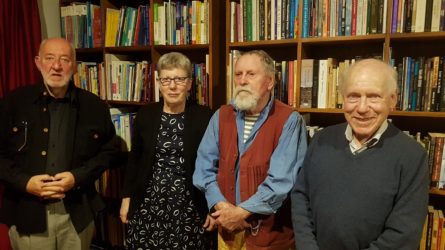 In 1969 it was against the law, in all states and territories, for men to have sex with each other – or even to proposition one another for sex. There were at the time those who were starting to question these laws. But the HLRS went beyond talk. It took action.

The people who founded the HLRS would probably today be referred to as ‘allies’. But that doesn’t really work in 1969. There was no one to be allied with. It would be a year before homosexual people began to stand up publicly on their own behalf, with the formation of the Campaign Against Moral Persecution in Sydney (formed mid-1970; publicly announced in September); and another year again until a Canberra branch was formed.

The HLRS was first organisation in Australia to speak out for homosexual rights. And its public meeting, held on July 27 1969 at Red Cross House on Hobart Place should be recognised as the founding moment of a movement that has changed laws and attitudes beyond anything anyone could have imagined that night.

Read the speech that committee member Graham Willett introduced the panel with here: The Origins of the HLRS [PDF, 143K]