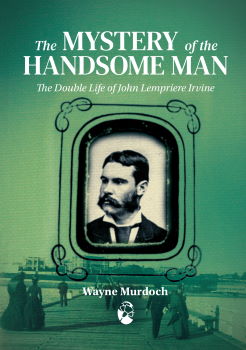 Ranging from the convict settlement of Port Arthur, to the heights of colonial Tasmanian Society, the goldrush towns of Ballarat and Bendigo, and the ballrooms of Marvellous Melbourne in the 1880s, this is the story of a popular man-about-town who held a secret – a secret that would occasionally lead him into the half-light of the Victorian underworld and would ultimately lead to his downfall, disgrace, and disappearance.

‘A cautionary tale of the costs of being different in earlier times…an intriguing life, fully lived.’

Gary Wotherspoon, author of Through the Gay Looking Class: The many lives of Clive Madigan

‘An invaluable, meticulously-researched account of a queer life lost too long to historians.’

Lucy Sussex, author of Blockbuster: Ferus Hume and the Mystery of the Hansom Cab

Wayne Murdoch lives near Bendigo in Central Victoria and often drinks in the wine bar at the Union Bank where J.L. Irvine once worked. He is the author of Kamp Melbourne in the 1920s and 30s: Trade, Queans and Inverts (Cambridge Scholars Publishing, 2017).