The Archives were saddened to hear of the recent death of Michael Bernard Kelly, best known, perhaps, for his activism with the Rainbow Sash movement, but whose work and calling reached far beyond, as an author, educator, retreat leader, and spiritual counsellor. 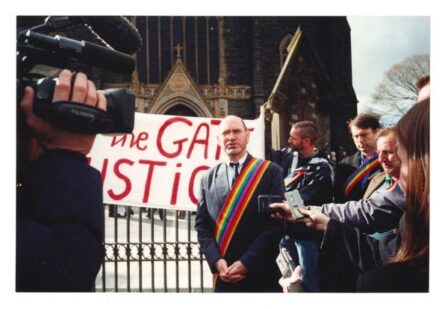 The Rainbow Sash movement was founded in 1997, to expose and challenge the Catholic Church’s oppression of queer people and the ‘contracts of silence’ by which the church operated. Michael has described how “On Pentecost Sunday, May 31, 1998, when the movement formally began, around 60 people were publicly refused Holy Communion by Archbishop George Pell. In Catholic culture worldwide this was unprecedented, an

d it created a media storm.” It was a peaceful protest, but a powerful one that sustained many LGBTIQ people of faith and their families and friends.

His faith dated back to his childhood, and at 17 he joined the Franciscan order, where he became disillusioned as his sexuality and his calling came increasingly into conflict. In later years he was a factory worker and a clerk and taught for 13 years in Catholic secondary schools. In San Francisco (the US one and one in Nicaragua) he participated in the movement against nuclear weapons, sharing the ‘gospel of liberation’ with campesinos, and ran retreats for people living with HIV/AIDS.

Back in Australia he was living quietly on the Mornington peninsula until he was asked by a young friend to join him in wearing the rainbow sash. As so often in his life he said ‘yes’.

When Graham Willett, from the Archives Committee, visited him at Peter MacCallum Cancer Centre between lockdowns, he was in good spirits and keen to chat. We were honoured recently to be entrusted with a small package from Michael containing sashes and clippings for our collection, which adds to a range of our existing holdings relating to Michael’s life and work including an oral history recorded by Dino Hodge. In 2009 Michael was interviewed for the oral history / testimony project Portraits in Faith in Melbourne in 2009 following the Parliament of the World’s Religions, for which he had convened an LGBT-focused session: https://portraitsinfaith.org/michael-bernard-kelly/.